How Portland makes us "differently eared" 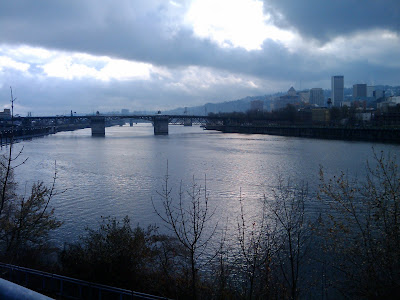 We walk or drive around Portland, and we are bombarded – by signs, buildings, sound, traffic, information of all sorts, every possible corner filled with the cultural stuff of the modern city, the air a battlefield of warring noises. We rush by it and through it all quickly because we couldn’t possibly pay attention to all of it, maybe any of it, if we want to focus on things that matter.

Which is all another way of saying: The city sometimes sings out to us in unexpected ways.

A few days before the Great Christmas Whiteout of 2008, I found myself listening to the new CD by the Portland jazz band Blue Cranes, “Homing Patterns,” as I walked to work. I like the energy of the band, the collage of blues, rock and noise, and I like the melodies Reed Wallsmith and Sly Pig wander through on their saxophones. Every now and then, the horns in the band collide, often in a chord, an interesting chord, that expands into another chord and then another, each one pushed to the limit of breath, to the point of honking. 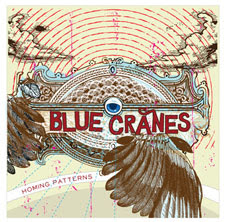 Anyway, I had reached the pedestrian bridge over the railroad tracks on Portland’s east side (about where the photo above was taken), right before you get to the Esplanade and the Steel Bridge. The rail line at that place curves deeply, and as I approached a long freight train, with graffiti-embellished boxcars and flatcars, lumbered underneath. They do not do this silently. They grumble along, of course, but because of the curve, they also squeal sometimes, a teeth-gnashing vibration that makes your fillings hurt.

But here, at this particular intersection, something happened: The screech of that train finished off one of those bleating Blue Cranes chords. Slid up the scale a little and finished it off. It was exactly the right note, somehow, and it pulled me up short as the delight of it all dawned on me. Amazing. The perfect sonic accident.

I crossed the Steel Bridge, the chord still in my head, and started walking along the Willamette River, passing the new Mercy Corps headquarters, where construction was underway and a jack hammer was at its business. But now the song had changed, and the hammer’s staccato picked up the tempo of the new tune, the chattering in time to the snare on the CD, on and between the beats. And then I noticed that the two trucks chugging along Naito Parkway created a deeper, more rhythmic bass line.

My ears were on fire. And I wondered, idealistically, is this always the way it is when you’re truly attuned to the outside world? It becomes something “symphonic”? But then it all fell apart as the CD and random noises took different paths; the city stopped playing along with Blue Cranes.
I didn’t know quite to make of it, this moment of alignment, of private meaning, my city and its jazz band united in my head, and my head only, to make something special.

A few days ago, I called composer/Reed College prof David Schiff to talk it over. Actually, I called him to talk about an essay about Charles Ives, the first great American composer of the 20th century, that he’d written in The Nation. I’d been attracted to his idea of Ives as “differently eared” than most composers, which accounts for the strange, cacophonous and at times wonderful intersection of sounds (marching bands and church music) in his songs and symphonies.

What made Ives differently eared, Schiff wrote, is that he was unable to do much filtering of what he heard — his songs and symphonies attempted to recreate complete soundscapes, often from his boyhood (perhaps a little like Caden Cotard in Charlie Kaufman’s Synecdoche, New York, who attempts to turn the all the tiniest details of his ongoing life into an epic piece of theater, then comment on it, then comment on commenting on it, in an infinite series). 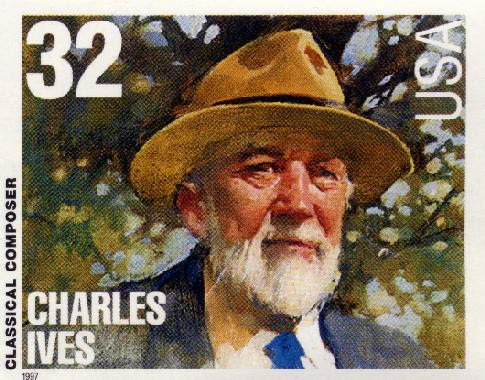 But before I knew it, I had blurted out my Blue Cranes story to him, seeking some explanation, I suppose. Schiff had many wise things to say to help me out –- about Ives, composers, the use of popular music by American composers as opposed to Europeans –- and he also related a history of noise. When Ives was composing his first modern pieces of music in 1906, America, specifically New York, suddenly realized that the industrial world had gotten noisy. Really noisy. And that this was both a change from the past and a big problem. Our first noise ordinances date back to this time, also, the invention of acoustical tile. And, I suspect, the ability to “close our ears” to noise, to ignore it.

Before this time, Schiff said, humans divided sound into two categories — those generated by the natural world and those that were man-made. But once noise, grating and crashing and clamoring, came into the picture, we started dividing it differently, into three sound categories: words, music and noise. “Because we live in a noisy environment, we filter out more now than ever.” One of the things we miss in the city these days, by the way, is the sound of the natural world, other than the odd blackbird or blue jay squawking.

But, of course, as soon as we started dividing sound into three parts, we started experimenting with the bleeding of one category into the other. Ives was part of that, turning the happy noise of his childhood into music. John Cage poked a microphone out of a Manhattan window and used the ambient sound in recordings. Steve Reich has turned spoken words into music. The Blue Cranes perform a song called “Beware the Pneumatic Nailer,” the opening measures of which approximate the title tool. And when we are concentrating (or daydreaming), almost everything becomes background noise.

But our ears, or rather the brain that makes sense of the sound waves our ears collect, are “permeable.” The outside world filters in. The categories collapse and reassert themselves. We start to make sense of the world we encounter and then we start to enjoy it. In Portland we might encounter trains and Blue Cranes, drills and jackhammers, Ives and Reich — a universe of notes that constantly changes. We are the audience for these notes, the way any of it makes sense. We are transmitters, too, creating our own noise/music/words. And the way we talk about what we hear affects the way the rest of us “hear” differently, too, how we process the sound waves that come our way.

In that sense, we are all becoming “differently eared” all the time. We like to think that how we are hearing here in Portland, how we are making and transmitting culture, is special, that some of our cultural accidents, our meaningful collisions, are also special and particular, of and by and for this place. Not that the same thing doesn’t happen in other cities. It does. But our sounds are our sounds. And surprisingly, sometimes they sound very sweet.
Posted by Barry Johnson at 12:08 PM